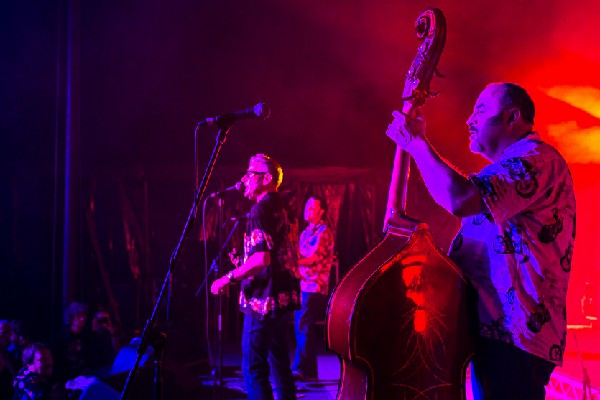 THE DETONATORS were formed way back in August 1997 – but it seems like only yesterday! Always based in Melbourne Australia, this popular hard-working quartet have never been afraid to hit the road, haul some kilometres and rack up a heap of gigs. They believe they have easily done more than 3,000 gigs since they first formed and have a finely honed array of original songs and a stage show that only comes from years of gigging pubs, clubs and festivals. Their relentless gigging and touring over vast distances over the years both in Australia and overseas has seen them become crowned kings of Australian roots Rock'n'Roll. Their original music, to which all members contribute, is best described as a lethal combination of early Blues with a sprinkling of Rockabilly and early Rock'n'Roll thrown in.

The band features bespectacled Rockbottom James on vocals and electric harmonica, Paulie Bignell on hollow body guitar, Doghouse Dave on slapping double bass with Eddie Fury on sticks and skins duty. There are six albums in their arsenal and a book currently being written about the bands exploits over 22 years which will be available late 2019. The Detonators are always on rotation on radio, Spotify, Apple Music, iTunes, YouTube etc, and have had their music on the local film 'Charlie and Boots' as well as the Australian Crime TV series 'Underbelly'. Thunder Road Brewing have used their songs in radio ads, and top rated American TV series 'De Grassi High' also uses Detonators music.

Dancing shoes, listening ears and drinking arms are compulsory for any good time Detonators show, because you never know what Rockbottom James is going to do or say next!